Last December we opined that this stock could go quite a bit lower as per this chart; 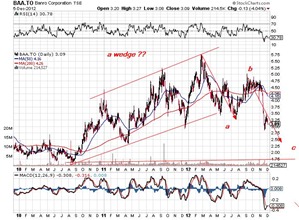 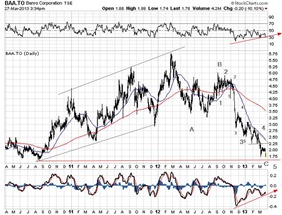 The ultimate target was at the red line at the bottom of the chart, about $1.75 less a bit. As it happens we are there! Almost. We have gone back to the base of the wedge tracing out a nice A-b-C in which C is about 1.6X A, a very common ratio. The MACD and RSI have been non confirming for about 4 months now. Also from a fundamental perspective, the announced financing of about $100 mln. and it’s dilutive effect has probably run its course.

Viewed over a longer term , the stock may already be in a new bull market starting in the early 2000-ends.

In that scenario a wave 3 up is about to start. This is, however a very low confidence call as the combination of digging for gold and doing it in the Congo is not the happiest combination.