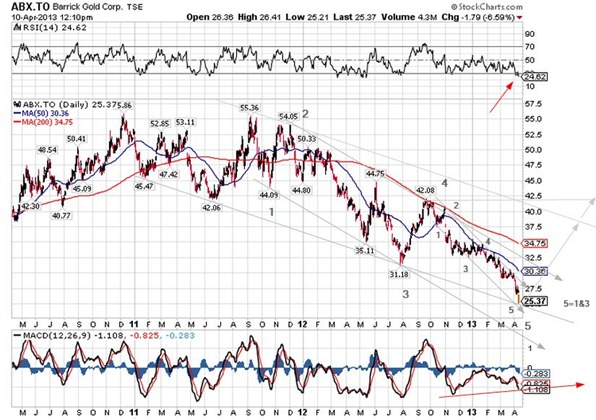 ABX is nearing our target of $25. We would buy at that level with a stop maybe two dollars lower. We would be looking for a wave 4 as a minimum, that is a rebound of about $10. Our friends at Goldman Sachs, who have every central banker in their rolodex, just announced their dim views on gold going forward. The Chilean government just announced an injunction against ABX’s Pascua-Lama project, which may be a blessing in disguise. From an EW perspective everything is in place for, at the very least, a wave 4 rebound of roughly $10. We are precisely on the bottom trend line and there are a number of specific niceties happening that only an EW-aver would appreciate. Otherwise it is worth noting that both the RSI and MACD would support a nice rebound. A buy!