We were wrong on Honeywell (see previous blogs) thinking that it would not rise much above $60 or so, and here we are at  about $74. This time we are using the longest chart that we could find (Globe & Mail) to improve our chances of getting it right. The only thing that stands out fairly clearly in this chart is a wave 3 from 1991 to 1999, corresponding with the tech rise at that time. Everything else is educated guesswork. Even so 3 distinct possibilities present themselves. In black; the peak in 1999 is THE peak, so wave 3 is somehow not wave 3 and from that point on the stock traces out a “flat” with an unusually long B wave with a new, unorthodox, top. Wave C down should start any moment. Given that the pattern has ben in force almost 14 years already, any moment means sometime in the next three months or so.  In purple;  wave 3 is indeed wave 3 and following that there is a triangle wave 4. Given the $40+ “mouth” of this triangle a top at around $85 should be anticipated, after which the stock should drop back to the lowest point in the triangle ($20).       In blue; no triangle, just an a – b – c  flat followed by a very ugly wave 5. All that is needed is just a new high, which we already have.

The upshot is that all three are calling for a fairly dramatic drop, either now or pretty soon. Time to sell. See detail of B-wave (or 5th wave) below; 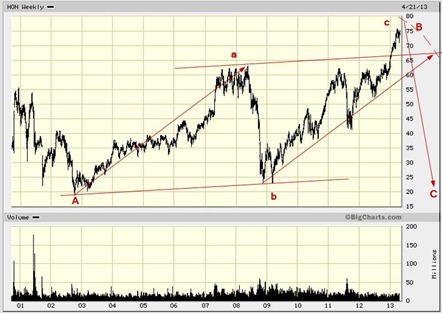