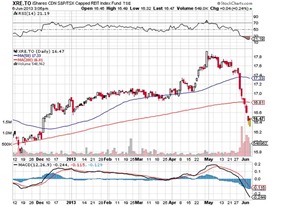 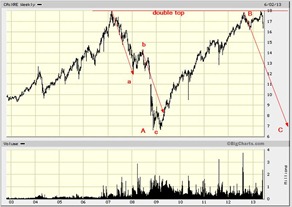 Real Estate Income Trusts are, superficially, rather easy to value. They still have the tax advantage of being able to operate on a flow-through bases and consequently they approximate the micro economic model where you buy a single unit and rent it out. Essentially it is a pile of bricks against a pile of debt that results in a return that can then be valued much like a bond. But, last time this REIT ETF hit $18 interest rates where around 5 or 6 % if my memory serves me well. Now that we double top six years later interest rates are at 1%. So theoretically, under the Efficient Market nonsense , these REITS should be considerable undervalued at $18! and even go a lot higher. Instead they drop in a single month almost as much as they rose in the previous 6 months. A mood change perhaps with regard to commercial property which, by the way, unlike stocks, can actually have a negative value under certain circumstances. Expect a lot more to the downside.