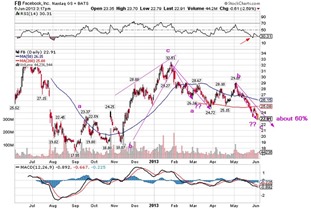 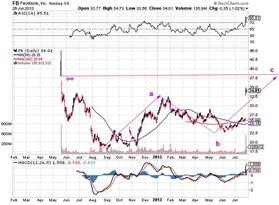 So the stock stopped dropping pretty well at the $22 level and has now shot up. The best guess is that , as a minimum, we are doing an a-b-c counter-trend correction. The burst up is most of wave 3 so a 4 and 5 should still be forthcoming. $37/38 would close a small gap left behind on the way down, and that might be the target for the c-wave to end this pattern. At a P/E of 141.7X we would prefer to exit sooner rather than later, say at $35. The RSI is already through the roof.