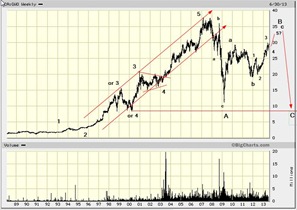 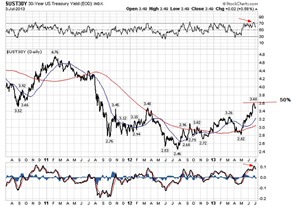 We were wrong on GWO and also MFC, primarily because of the time this correction has taken. We are now in the 5th year, more than twice the time it took from top to bottom. In the meantime the notion that higher interest rate are good for insurers has been universally accepted propelling these stocks higher faster than the other “financials”. But, in at least the case of GWO, the pattern is becoming clearer and clearer. This is a B-wave that is fairly close to completion. It could be complete as is but it could also continue for a few more months to do a more articulate 4 and 5. $35 would be a maximum target. Bond interest rates are rising quite dramatically but it is not yet clear that they will continue.  Sell before the C wave starts.