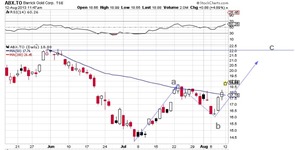 Following the script rather precisely. Keep in mind, of course, that an a-b-c counter-trend bounce is simple a MINIMUM expectation! Ergo we should get to $21 – $22 before this is over, on $14.5 that represents almost 50%, certainly if you did it in two separate trades as suggested.

As far as going higher than this, it is good to know that another 4th wave of previous degree is at $44. The stock could go there but that is speculation at this time.