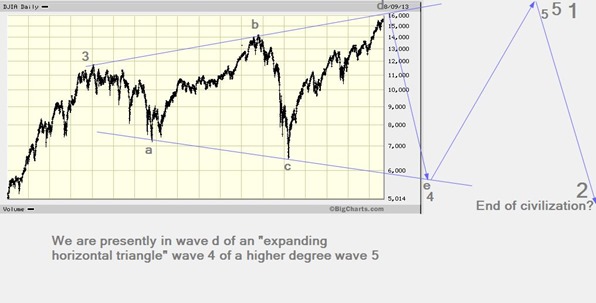 The Jaws of something pattern does not exist as far as I am concerned. Nevertheless it is possible to get  similar result by labelling the patterns in a proper way. There seems to be general agreement that we are at the end of a wave 3 of a 5 wave sequence starting sometime during the industrial revolution. The conclusion , therefore, must be that we are in some 4th wave of a similar large degree. Many believe that the actual top of wave 3 occurred in 1999/2000, which might be appropriate considering the change in century , the tech debacle  and Y2K. 4th waves often take the form of triangles, sometimes expanding horizontal ones. That would fit perfectly right here and explains, to some extent, the wild gyrations we have had over the past 10/15 years. A fourth wave horizontal expanding triangle is a perfectly legitimate structure in the vocabulary of EWers. It is a 3-3-3-3-3, a-b-c-d-e, 5-wave structure that typically ends at the bottom trend line or, at least, near it.

If correct the market has a little way to go up to say , roughly, 16000 and then the market should collapse to about 6000, not a big feat considering that it has done that already twice in this one , single, 4th wave. If the count is correct, the market should recuperate and make a new high in wave 5 to finish the 300+ 5-wave sequence. That would complete wave 1 of some super degree to be followed by wave 2. You do not want to ride that one out!!

I have used a semi-log scale chart as it tends to put the moves in a better perspective.