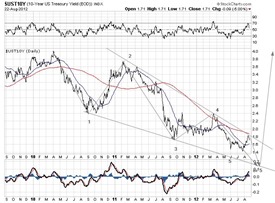 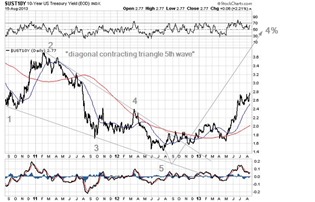 This near perfect diagonal triangle (even if it did not quite make it to the trendline), and the fact that interest rates had gone up from 1947 to 1980, 33 years or so, and then down again for an equal 33 years (markets just love symmetry for some reason) and also the often overlooked fact that rates were at an unbelievable low of 1.4% made us make the call that rates would go up. All this despite evidence to the contrary provided by the Fed. promising a new form of never ending QE. By the way it is worth noting that every time the Fed. came out with a new variation on that theme rates went initially went up, not down. Here we are a year later and every and any central banker all over the world is reading from the same page of Keynes’  Alice in Wonderland in which he opines that the only good interest rate is a zero rate. Oddly enough this otherwise consummate economist did not, in his heart, believe that there is time value to money and consequently there need not be a market determining that time value.

Which brings us to the present value concept. Basically discounting the proper math itself, every cash flow in the future, be it from a bond , a stock, an annuity, rent or whatever has a present value equal to the sum total divided by the interest rate. As the interest rate is the devisor, the value of everything starts approaching infinity as rates drop closer to zero. At the margin miniscule changes in the rate has enormous effects on valuations. The moves in the 10y bond over the last year has not been miniscule, in fact it doubled and that is huge. Put in this light, it is absolutely amazing that stock markets are still valued as they were a year ago. We really are in Wonderland. 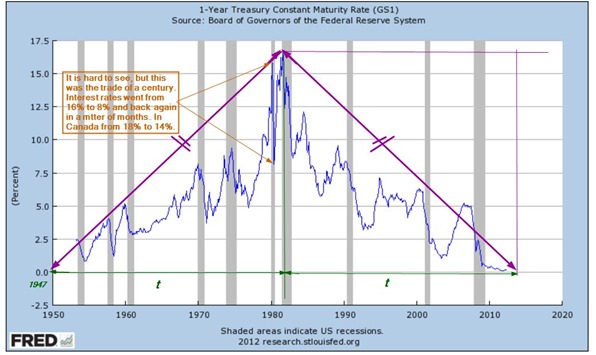 Another way of looking at it, is demonstrated clearly by a look at MFC, Manulife; 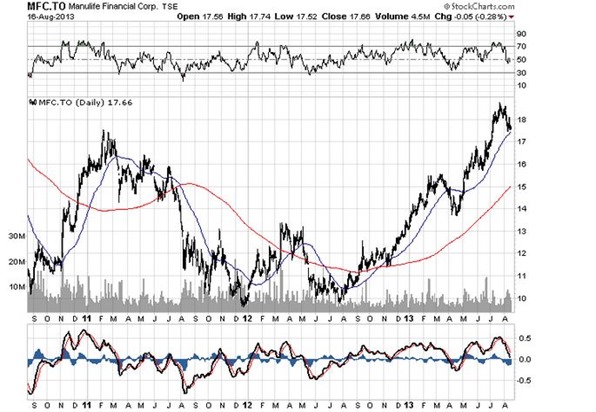 Notice that the stock has nearly doubled in precisely the same period that interest rates did. Contrary to talking head opinions this is not because life insurance etc. is that much easier to fund at high rates (which, of course, it is), but because the actuary value under present accounting requirements changes instantly with the rate (but that does not help the wealth management side).