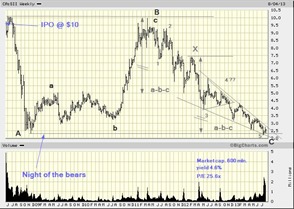 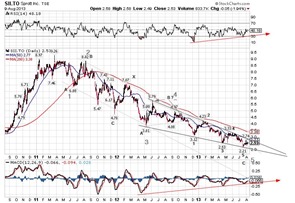 Now more than 4 years ago it was Eric Sprott who decided to do a “night of the bears” for Toronto’s financial community. (it was actually his daughter who came up with the idea if I am not mistaken). For the occasion one Kim Parlee of BNN fame was recruited to be the MC/moderator and as guests Ian Gordon (longwave cycle, Kondratieff, not EW.), Meredith Whitney and David Rosenberg (then economist at ML, now Gluskin Scheff) were invited. All three had and have a reputation of being a little bearish , contrarian and iconoclastic , much like Sprott himself. The venue was one of the older theaters in Toronto, the Pantages Theater and the place was packed. Despite the dismal subject, it was a great success.

The timing could not have been worse. It coincided, almost to the day, with the lows in the US and other markets but this is not unusual given the lags in time needed to organize such a large event. In any event they got the timing of the IPO, almost a year earlier, much better. The stock was oversubscribed and immediately crashed with everything else which is a little odd given the company’s reputation for being contrarian and doing much of their business with that elite class known in Canada as “accredited investors”. A designation that seems to be entirely based on the conspicuously false premise that money=smarts. By the way, ex-stockbrokers get a lifetime exemption regardless of money or smarts. In any event the stock recuperates in tandem with the new gold rush , double tops (remember to always sell) and then dives down again to make a new low. In EW terms this is a big “flat”, an A-B-C that goes predominantly sideways following a 3-3-5 structure. (If the second top was the real high a zig-zag is another possibility). The whole mess is hard to count but at least there is a fairly distinct wedge that could be and probable is a 5th wave. To sum it up this stock looks more like a buy than a sell to us. The irony , of course, is that the night of the bears was either too late or way too early, which is why they say that timing is everything. Well this is the time to buy. Our initial target is about $5 which is the base of the wedge down and also near the apex of a triangle wave 4 (if there is one). Both the RSI and MACD support our view.