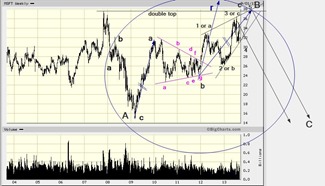 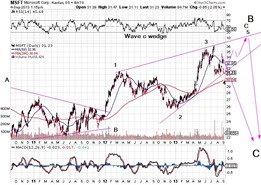 The only thing that was always perfectly clear was that Microsoft traced out a two year long triangle. Given the size and duration there can be little doubt that this is a b-wave, the pause in the middle so to speak, except that the middle is not necessarily in the middle. At one point we therefore assumed the whole thing was complete at about $33 and that the stock would drop. It did, but not as far as expected. Now there are two possibilities. Either the stock is doing an a-b-c X a-b-c (double zig-zag) or a simple a-b-c, both from the lows. If the former applies the stock has seen its best. However in the latter case the c-leg should subdivide in 5 waves itself and probably as a wedge. This would allow one more high near $38 where the trend line of the wedge intersects with the double-top line. This could take about 1/2 year to complete which does not fit the overall outlook very well. Best way to play this is with a tight stop just below the lower wedge line. Should the stock manage to get back > $34 we would sell. Fundamentally people wondered where the growth would come from. Now with the Nokia deal under the belt people may conclude that growth is finnished.