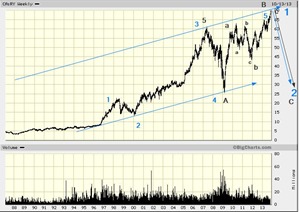 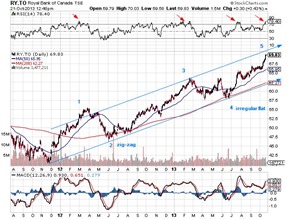 This will be the 49th blog on the Royal. Some have been very prescient, others a little less so, but all in all you would have done very well following our advice. The stock passed the 1bln. Canadian dollar milestone the other day which seems to be a rather opportune moment in time to do another one.

Canadian Banks are beholding to, and in bed with, the different levels of government to a degree that both sides would prefer we do not know. The “bailouts” in Canada were in many ways proportional to those in the US., specifically the guarantees of the CMHC are  proportional, if not larger, than those provided by Fannie, Freddie etc. except that these were provided after the Great Recession. But we will look only at the EW, not the fundamentals. The wedge, that for a while was a distinct possibility is dead. We have gone too far for that to be right after exceeding $65 or so. The next stop is the trend line, where we are now, give or take a dollar or two. Two possibilities present themselves. The , by far, most plausible is that of a large B-wave from the lows of ‘09. The wave structure, even the minute one of the c of B as shown in the smaller chart, is near perfect having all the required subdivisions, alternation and so on. A second, much less credible possibility is that of a simple 5th wave (in blue). The resolution will be about the same in both cases, that is a sharp drop towards a level below the low of the A wave ($25), or a drop in a large degree wave 2 towards the 4th wave of previous degree (also at $25). Take your pick.

We have pointed out earlier that this stock can be traded more or less exclusively on the value of the RSI. It too points towards a sell.