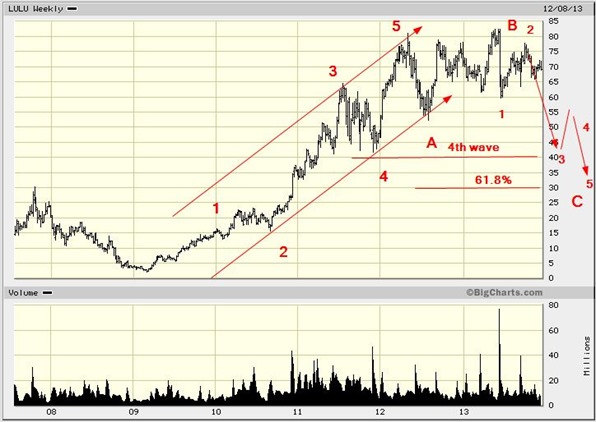 This is the US $ chart as I cannot seem to get the Canadian one. For almost two years we have viewed this stock as a good short. We still do. It trades at a p/e of 37 and has just had a minor palace revolution. The EW count on this stock, as shown, is probable correct given its simplicity. Assuming that it is, it should now be in the beginnings of wave 3 of C, on its way to $40 (4th wave of previous degree), or $30 where the retracement would be about 62%. This would fit nicely for those that would like to view this simple as a large 4th wave which, of course, should not overlap with what would than be the top of wave 1, also at $30.

The argument that we have just completed a triangle wave 4, and should now “thrust” up to about $100 is not very credible in our opinion. The retracement is not deep enough and the subdivisions of the 5 legs in the triangle are not clearly 3-wave structures.

Previous blogs are under LLU. The chart structure is essentially identical to that of the FTSE below except that the respective legs are in a different phase.