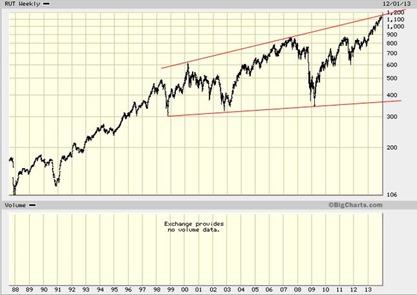 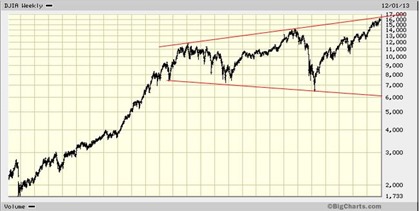 A month or so ago we called for a top at around 1150 on the Russell 2000, not including a very common throw-over. We are there today and, in the mean time the Dow has managed to catch up with the pattern. The patterns are obviously not the same in EW terms and it is beyond my pay-scale to determine if this is one big expanding triangle (as with the Russell) or a series of 4-5s as with the DOW or , alternatively, a complex A followed by a B. In any event it is not the Jaws of something, which, like the serpent in Loch Ness (yes I was there) does not exist. Regardless these are not pretty patterns as the next big move should be down. The FTSE with its initial 5 waves down back in May/June (not shown), has still not negated itself and remains bearish.