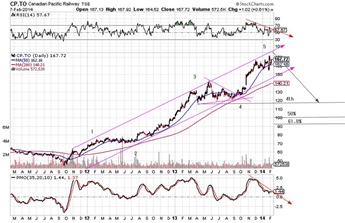 We have been premature in calling a top on this one and therefore have been wrong so take all this with a few grains of salt.

Un till about 15 years ago this company was part of a conglomerate that consistently traded at a discount despite it’s historic significance as the binding force behind the Canadian nation. It took an American, ironically but perhaps not surprisingly, to wake this thing out of permanent hibernation. Or was it the delays in building pipelines? At this stage it does not matter, the stock trades at a p/e of 33x and yields a very rich dividend of just under 0.9%. The chart looks awful. Not only is the stock back into the channel established between 2001 and 2008 (not shown), but over the past two plus years it has traced out a classic 5-wave move, more than tripling in the process. A initial drop of about $50 should be expected.

It could still be argued that such a drop would only be a large wave 4 in an otherwise incomplete up move, but if the ‘08-‘12 move is interpreted as a large triangle (with a truncated e), this alternative becomes rather far fetched. This is definitely a sell or short right here or just a few dollars higher.