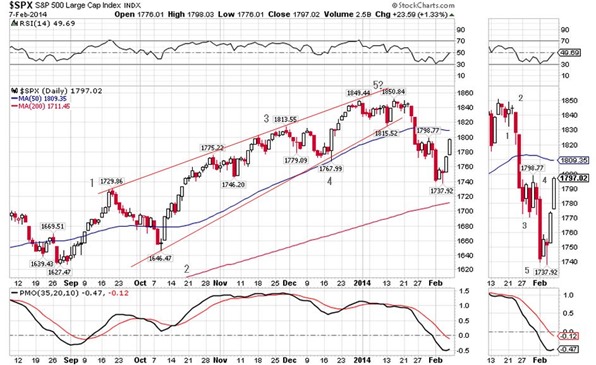 The S&P is slightly different from the DOW. The chart shown in the thumbnail looks distinctly like a 5 wave move, half and a bit of which has already been retraced rather rapidly. Typically 5 waves do not stand alone. This might imply that a serious downtrend, and at the very least an a-b-c down is in the making. However, it may also imply that the second top at 1850 is actually the top of a b-wave and the big drop is a c that completed an entire a-b-c down already at the 1737 low. There are a number of reasons not to prefer that alternative but we have to remain alert to that possibility. In the DOW, not shown here- see previous blog- this could be a minor 4th wave to be followed by a fifth before this drop is over. The wedge on the S&P suggests a drop to about 1620 should be favoured.