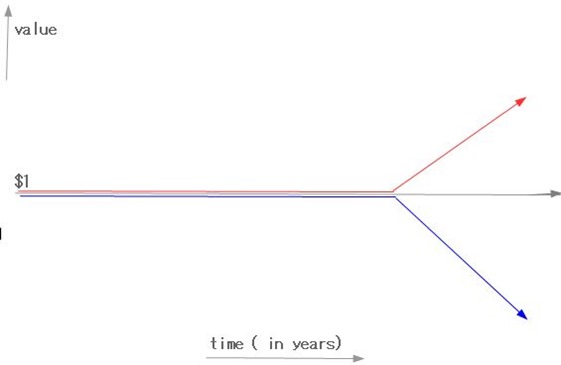 This is the chart for Duca bonus shares. They do not trade so one has to imagine the path, which is illustrated above. Bonus shares  are created by capitalizing earnings and then proportioning them according to some rule, in this case utilization of the services. No money changes hands and these shares do not trade. In a sense they are a pure illusion but it makes the shareholders happy because they feel that they are getting money back, which they are but that money, of course, comes directly out of their own pockets as the result of charging more than the no-profit, mutual co-operative would otherwise require. They are even RRSP eligible even though that can be questioned. When such a co-operative company comes of age they want to become like the big boys and throw aside all the feel good, community, bond and whatever other attributes there may have been and move on to the share-holder predatory Wall street cut-throat model. While in transition there are elements of both models in play at the same time. Very confusing.

These “shares” are not real shares, no money has ever been paid to get them (their ACB is essentially zero but not under all tax systems). To redeem them you first have to  let them mature which takes 7+ years, than you can only cash in if your fellow members do not want to do so as well; 10% is the max in any year (which does wonders when there is a panic towards the exits). Most are kept as they pay a small 2% bonus and the good old feelings of camaraderie favours staying put. DUCA has roughly 50 mln. of these shares on the books, a liability to the members that they conveniently view as equity.

There are three possible paths for these shares over the next 10/20 years. Nothing changes and they stay at $1 (in black, I abstract from the 2% return)). Things go really well and everyone is dizzy with happiness and the shares go up. This is the red possibility that could happen with real shares, but never with bonus shares as they will only be redeemed by the company that has no incentive to pay more than a single dollar regardless of how the business grows. Then there is the blue possibility. It never happens gradually as shown. If it occurs it will be sudden and due to a lack of money or will to redeem the shares. This would happen in the event that management overreaches, for instance in the area of commercial loans, or by straying away from their core competenties and moving further afield. Apart from these potential risks it is not rational even in normal times to keep these shares once they have matured as at best you gain 2%, which is ridiculous for a required hold period of almost 10 years. A sell before everyone else comes to the same conclusion.