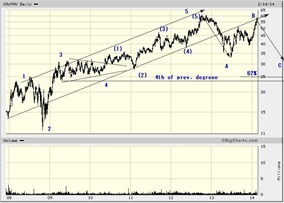 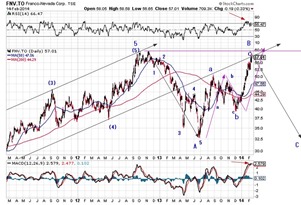 We have made some pretty good calls on this stock despite , usually being too early. We bring it up again because when looking at a number of different gold stocks things start too look pretty positive. Furthermore it is not unreasonable to expect gold to go up as stocks decline, the common factor there being more QE. Franco Nevada is trading in a troublesome way for such a scenario to be correct so some caution is advisable.

Franco is sporting one of the clearest B-waves I have ever seen. Of course it turned out to be much larger and longer in duration than we ever expected but now that it is done (we think) it is a uniquely well articulated B-wave. The problem, of course, is that B-waves are counter-trend corrective moves that are invariable entirely erased and most often even a little more than that. On the balance of probabilities, just to use a legal phrase, this thing should come down like a rock. It follows that tight stop-loss orders should be used against any long gold/gold stock position!

FNV is about to double top. It has retraced more than the other gold stocks. This is partly the result of it being a royalty collecting company rather than an earth moving operation. Many of the idiosyncratic risks are consequently avoided, at least initially.