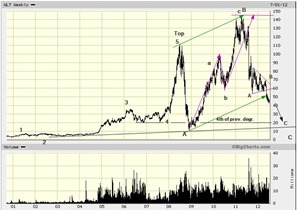 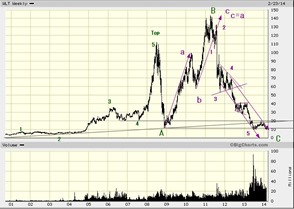 At the time we commented that – quote In fact C is already equal to A and could be considered complete were it not that it normally stops below the start of A, normally reaches at least the 4th wave of previous degree level and often reaches the lowest boundary line at about $15. It has done none of this. – unquote. It has now done all three things that it had not done then. The actual low was at $9.88 and it is presently trading within one single dollar of that level. The triangle shown then as a B with is incorrect as this whole thing is a C-wave and therefore must subdivide in 5 separate waves so the triangle must be a 4th wave in that sequence. For the moment it is not clear that the low established in July of last year is THE low. A very minor wave 5 of 5 of C may still be required but this should not take the stock much lower. It has achieved all that it should and has fallen about 93%. Shorts presently are about 38% of the total float which is unheard of. If we were to get the slightest bit of good news this thing will rocket up. A “speculative” buy in our opinion for this coal company. (see previous blog,perhaps with BTU). The stock also trades in Toronto under the same ticker.