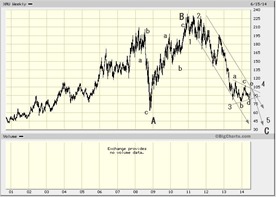 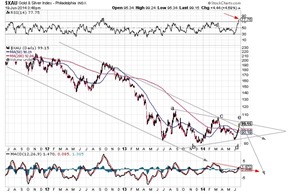 Very nice day for gold and the XAU. This is the anticipated e wave in a triangle and it is close to complete. The move is no doubt the result of the Fed’s Chief musings about “considerable” meaning “it depends”- so much for transparent guidance. On top of that the economic term hysteresis was brought back into the Fed’s vocabulary just to make the already incompatible two mandates, i.e. low unemployment and low inflation, even more confusing by admitting that we do not even know if unemployment  is actually fully reversible, considering that this variable is path-dependent as it reacts to various stimuli. The concept is easily understood if you think of the ice cap melting away. Once it is gone it will take much colder temperatures to get it back than it took to keep it, because, among other things, heat reflection. The same is true to some extent with unemployment making the entire Keynesian approach little more than a vain attempt at applying economic theory. The whole thing is already almost hysterical. Gold is virtually in the same position, shown below. 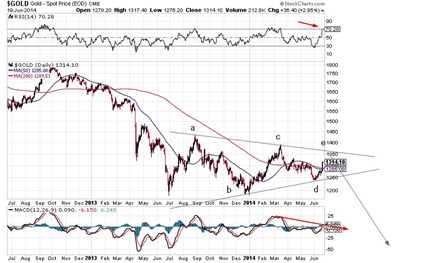