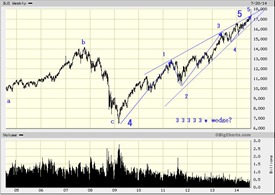 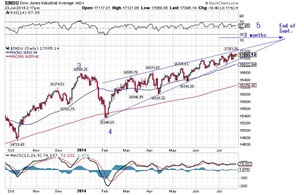 EW, apart from all the rules and guidelines , should adhere to the aesthetic requirement that the patterns should look good. Earlier this month we had a chart of Citigroup and offered the opinion that the two down legs in respectively 2000 and 2007 might just be parts of one and  the same complex correction. This may be true for the Dow as well which would then make this leg up a wave 5, which is often a wedge. This sure looks like one, both on the larger scale starting at the lows of 2009 and the smaller scale starting this February. Assuming that it is a wedge of sorts it should end before the upper and lower boundary lines intersect, there just isn’t any room left there after. As the upper line rises by about 130 Dow points a month 17360 is roughly as far as it can go, but do not expect it to get there simple because these structures stop well before the theoretical end, the apex.

Greenspan, we were told, owned exclusively T-bills. Bernanke was apparently equally conservative but Yellen owns a lot of stock (about $4mln or so) by way of individual names or ETFs. Most are up by at least 50% or more over the past year and perhaps someday we will hear if there was a conflict of interest. Socialism is nice but capitalism even nicer.