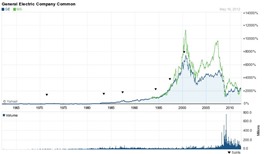 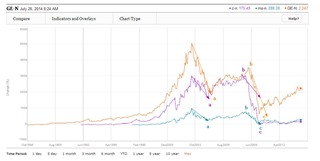 The chart on the left is from May 17th, 2012, slightly more than two years ago(see those blogs). At the time I wrote – “With all due respect to the Gainesville gang, it would seem to me that this chart looks a lot like GE and that it is conceivable that MS has done the entire correction!”. On the right is todays version, this time including Citigroup, C. All three of these stocks went through an a-b-c correction that wiped out 90% or more of their respective values AND, with the exception of Citigroup, the a and c legs were more or less equal and in one or two cases even the b leg was roughly equal to the a and c. All this suggested that this is one single , completed, structure. For clarity I repeat MS below;

MS never makes a new low in 2012. If the chart uses monthly data this appears to be the case but it is not. Anyway from both these MS charts the a-b-c correction is clear as a bell. Interestingly, after insisting for years that the “orthodox” top was in 2000 and all of the above was just wave A, followed by a large B to now be followed by a large C down, the count has changed as per the most recent Theorist such that the B-wave, which is now often way above the start of A, has now become a 5th wave, and not just for these individual stocks but for the Dow (and other) index as well. The end result will be more or less the same but the opportunities along the way, to either make or lose a lot of money is very much path-dependent.  So at least these four stocks, that do not look as if the will make new highs soon, may actually already be in the next bull market. If so they cannot make new lows but that does not imply that they cannot get close.