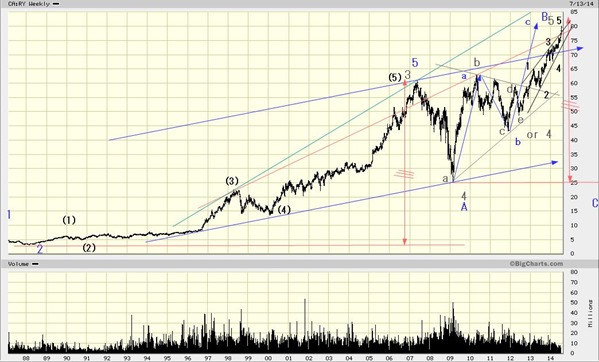 If you predict, do it often!

The count is not clear and differs for the 5 big banks in the country. So we just look for what normally would happen. The stock would trade within a , usually well, defined channel.  Here in blue. Having passed $70 or so we are above it. Then there is the possibility of a large wave 4 triangle, very compressed but a triangle nevertheless. None of the others have this. The triangle typically targets a level that can be found by connecting a previous top through the top of the b-leg. That works out to about $77 and we broke that. Measuring the “mouth” of the triangle gives about $35 and added to the low of e of $45 comes to about $80 or perhaps a little higher. Basically we are there! If we use the B-wave concept and , as always, look for equality we would find that at $81 give or take. There is only one line left, connecting the tops, in turquoise, that might point to a higher level around $92. But, looking at a detailed picture; 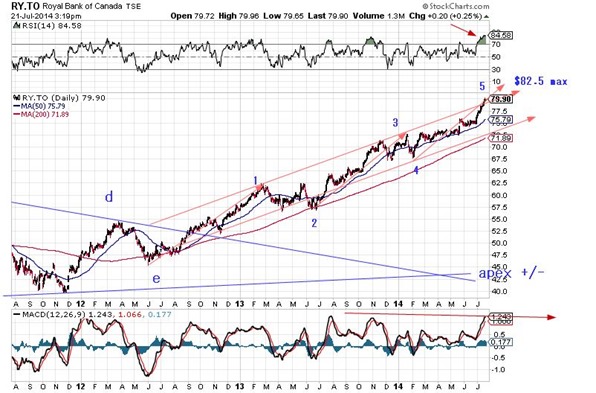 We see that wave 3 is smaller than wave 1, therefore in order that wave 3 does not become the shortest wave, wave 5 logically has to be shorter than 3. In this case that works out to less than $82.50. On top of that, the RSI which for this particular stock has had very good predictive powers, is at its most overbought for the past three years or more. This is a sell and I hope that call will be as correct as the $26 buy in 2009. Good luck.

Below is that blog of Jan. 22nd 2009 , still done by hand. Notice that that chart is pretty well the mirror of the Bigchart above albeit on a different scale; 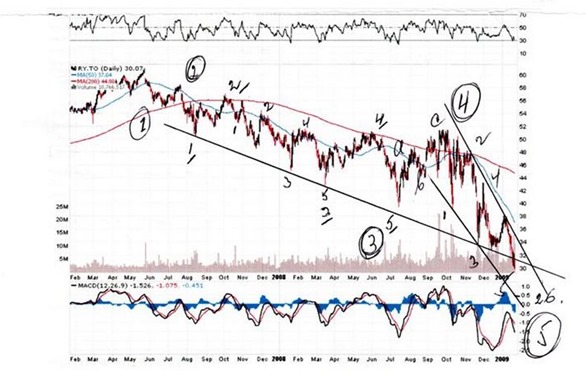 It called for a rise to at least $38. Today I would change the count to an A-B-C instead of a 5-wave sequence. The C is a diagonal and normally is retraced entirely which would have given an initial target around $52. By the way $26 was a 50% correction of the entire value and a 61% correction of wave 3 from ‘89.