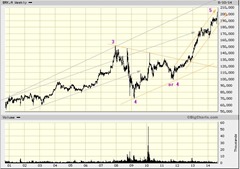 Don’t look at previous blogs on this company, let’s just say that they did not work out exactly as anticipated. The stock hit a new all time high of about 203 thousand dollars, nearly triple the value at the lows of the “great recession”, during which, by the way, this stock like most others also lost more than half its value. We do not wish to diminish the investing talents of Mr. Buffett and Co. but do wonder if the tripling of the stock was entirely his doing or if Yellen and predecessors had a small finger in this pie. Whatever the case, if you still own a few thousand of these shares we would recommend lightening up. Given the almost cult-like status of Berkshire in the investment community, we are aware that a call to sell would be received with complete contempt and derision which is why we would just sell 100 or so shares every now and then. Dollar-cost-averaging in reverse so to speak.

Above I have used a Yahoo chart. It has the advantage that the highs and lows are sanded down so the overlap (a contentious issue in any event)  that would have occurred between 2 and 4 does not show. Furthermore the triangle suggested as a 4th wave is far from perfect. Another question that might apply is whether or not Berkshire should be viewed as a stock or more as a mutual fund. None of this detracts from the notion that this might just be close to a top.