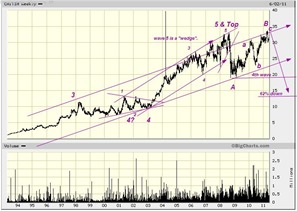 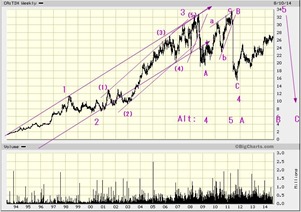 Toromont was trading at about $32 when we recommended the immediate sell of this stock about three years ago. The target was just a tad under $15 and in reality it got close to $14. The labelling was never entirely clear but the B-wave definitely was even though, today we could argue that it was not a B but a 5th wave wedge similar to the one at the top of wave 3.

This was a pretty accurate prediction that would have netted 50% on the way down and, if bought at $15 another 50% minimum on the way up, or perhaps even more, see detailed chart below; 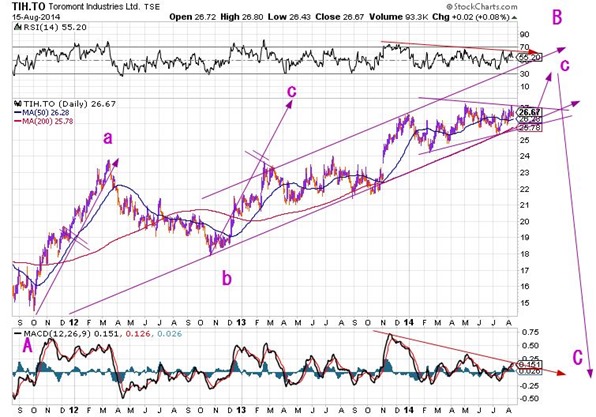 Remember that when you do hit a target that it invariable pays to go the other way. In this case the drop was 62% from the peak so that became very compelling. Then you stay with the trade un till at a minimum there is an a-b-c rebound. Even today you do not yet have that! So why does nobody really listen? Here are some answers;

Many people believe that EW is a theory, comparable to something like EMT- Efficient Market Theory. Well, it is not. The reasoning underlying it is entirely inductive and pragmatic, no silly hypothesis at all. It is also not deterministic per se. Nevertheless many view it as some sort of voodoo economics which, in practice, is hard to accept as invariable EW will tell you to buy when things are going awry, and tell you to sell when things are going well. That is counter-intuitive so no one does it.

Things are going swell so, perhaps, it is again time to sell. To be more comfortable we like to look at similar stocks, in this case Finning would be a good choice. What is good for the goose is good for the gander. Here it is; 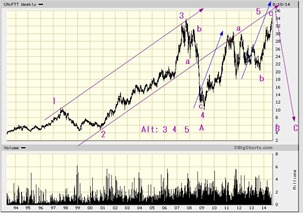 The A-B-C “looks” great on this one, particularly since it has more than double topped. It may yet go to about $37 where it would re-enter the channel which we would not expect. Time to sell the lot. DE and CAT, though not clear, do also suggest that they are near highs.