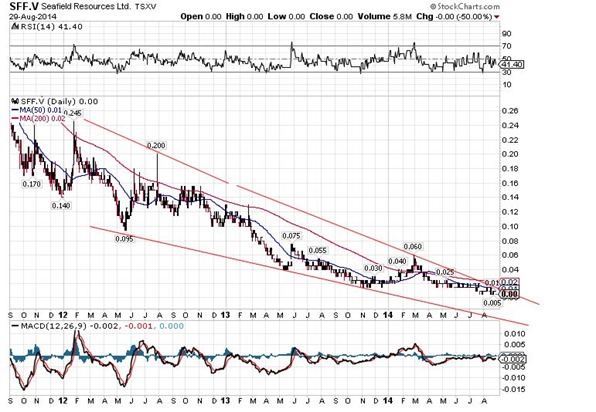 If you see a high, low and close all at the same zero level you know the end is near. A few days ago the company received the following notice;

Seafield Resources Ltd. (“Seafield” or the “Company”) (TSX-V: SFF) announces that further to its July 23, 2014 news release, it did not make an interest payment of CDN$402,317 due July 15, 2014 under its debt facility agreement (the “Facility Agreement”) with RMB Australia Holdings Limited, as lender, and RMB Resources Inc., as agent (collectively, “RMB”) (see news release dated February 21, 2013).  On August 28, 2014, the Company received from RMB a Notice of Default and Notice of Intention to Enforce Security under section 244 of the Bankruptcy and Insolvency Act in respect of amounts owing under the Facility Agreement.

But previously, on Aug 8, the company announced;

Toronto, Ontario, August 8, 2014 – Seafield Resources Ltd. (TSX-V: SFF) (“Seafield” or the “Company”) announces that it has granted an aggregate of 15,650,000 incentive stock options to officers, directors, and employees of the Company, pursuant to the Company’s stock option plan. The options have been granted at an exercise price of $0.05 per share, expiring on August 8, 2019, vesting immediately. This stock option grant is subject to approval by the TSX Venture Exchange.

It tells you what gold mining is, unfortunately, often about. Reality will soon set in as the FirstRand group of S. Africa will attempt to collect on it’s security for the $16.5 mln. loan made just a year and a half ago. During the very short life time of this company it ploughed through roughly $45 mln. of “other people’s money”, a good part of that ending in the pockets of well paid senior managers.