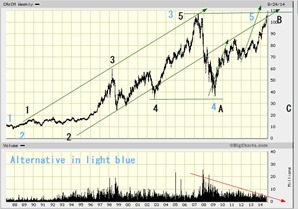 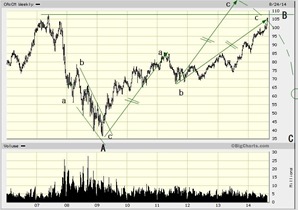 Same chart, just different timeframes/sizes. CIBC is the 5th largest of the big 5 in Canada. It is, arguable, best known for the “Commerce Building” in Toronto which is a very impressive structure that has been the tallest in the British Empire for decades and was completed in 1930. Other than that they have numerous buildings all over Ontario that look a little like classical Roman pillboxes that exude safety and permanence and very little imagination. They have managed to stay alive over the years and today they are the only Canadian bank that has not regained the entire loss in value of their stock due to the Great Recession. That may yet happen!

The stock has a fairly clear EW count. Alternatives exist, as always, but the path of least resistance suggest that THE top occurred in 2008, in synch with the entire world, and that from that point we had an A down followed by a B up. That this is a B and not a 5-wave sequence is, at this point in time at least, pretty obvious. The A can be counted either as a 5-wave affaire or an a-b-c wave A. The latter interpretation fits best with what is starting to look a lot like a very large flat. If it is, and we believe that it is, the next major move will be C down. It is still possible that the stock would try to double top by going a little higher but we would not suggest sticking around to find out. A sell.

We have been wrong on this stock before but a look at a previous blog can still be instructive to see what an alternative count might look like.