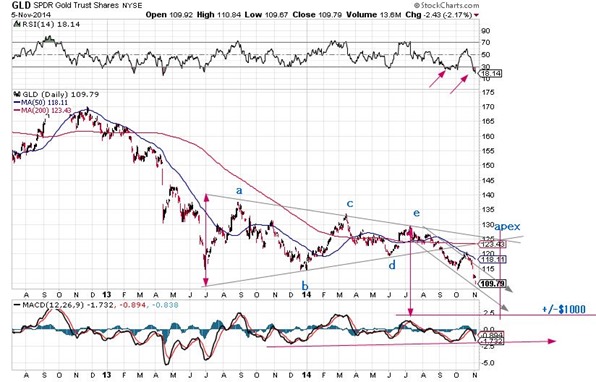 If this is indeed a triangle – there are one or two shortcomings – then it measures to a downside target of about $1000, slightly more than a month from now. Of course it is not obliged to do exactly that. The RSI is already looking a bit oversold and the MACD is downright positive. This chart suggests that the next big move, regardless from where it starts, should be up to, at least, the $1375 level. For the inferior goldstocks, that are essentially a leveraged play on the metal, that is a large and tradable move.

In the big picture we can conjure up all sorts of scenarios, none of which will actually happen. Some believe we are in a 4th wave, to be followed by a 5th. If so the best guess would be that at the coming low of say $1000 , we are completing just the A of a correction that should ultimately take us down the usual 62%. The numbers on this G&M chart are monthly and do not show the actual extremes! If this is a 4th then it should not overlap with wave 1, which had an actual high of $880, very close to the 62% retracement point on this chart. There are numerous variations to this theme (for instance a triangle 4th wave which would promise ridiculously large ups and downs for the next 10-20 years etc. etc.) For FIAT currencies there is only one certain outcome, zero.