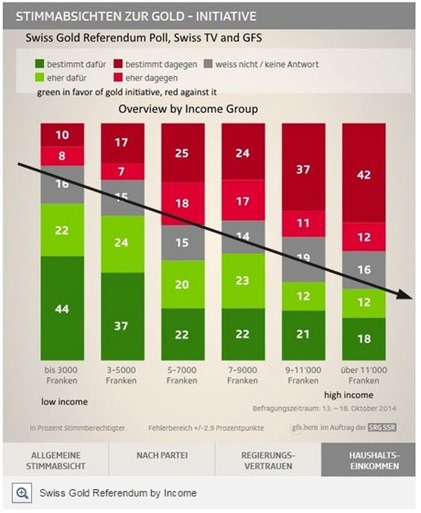 Here are the latest poll results for the Swiss gold referendum. They speak German, French, Italian and Rheato Romance in Switzerland, but as a courtesy to those that do not speak any of these languages they always add English. What you have here is how the Swiss vote as measured against household income, the lower the income the more they are in favour and vice versa. I added the arrow to make it look like a graph. Presently 38% are in favour and 45% oppose. The mood is shifting away from the partial gold-standard, but there are still three weeks to go.

There is a great economic lesson to be learned from this. Economics is one of the few “sciences” that always has two sides to everything. Whereas a normal creature would delight in a strong currency (the Swiss actually have for centuries), this is not always the case. The poor want a strong currency as their (imported) groceries are cheaper and the rich want a weak currency as it then becomes easier to export  chocolate, pharmaceuticals and anti-aircraft guns driving up the shares of these companies. This is clearly visible in the SMI; 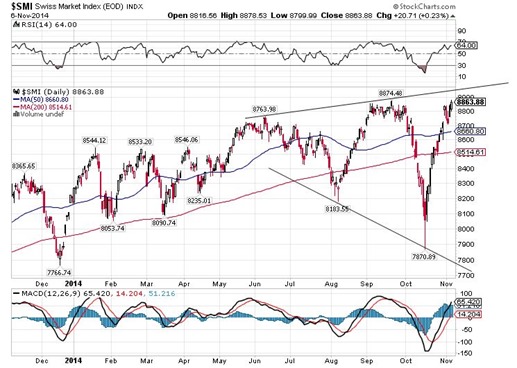 The Swiss Market Index is one of the few, if not the only, index to have made a new high in Europe thanks to a lot of intervention by the SNB. With the gold standard back that would not have been possible. By the way as an aside, it is also indicative of volatility. This index has moved more than 2000 points or about 25% of its value in less than two months!

Conclusion ; CB intervention tends to make the rich richer and the poor poorer. Fortunately in the US the intervention has stopped working on the currency front. In fact the Fed has been relegated to second fiddle compared to the government itself quite apart from the fact that historically it was Treasury’s jurisdiction in the first place. Interestingly the US government itself is acting in a decidedly un Keynesian manner by reducing (relatively) its budget deficits, see below;

Where is the beef??