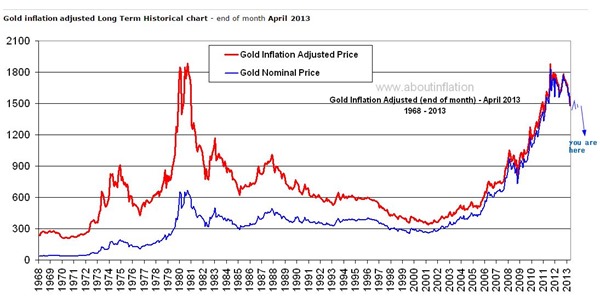 This is a chart from www.aboutinflation.com. It shows the gold price from the time convertibility still existed ( abolished in 1971!) to last year, both in inflation-adjusted and nominal terms. You can see that in 1980 gold (and silver) were great inflation hedges as the red line moved well above the blue line. Not so much recently when the two moved , more or less, in tandem proving once again that Fisher was right with his MV=PT. You can create as much money as you want, but if the velocity adjusts downward there is no effect. Which, of course, also leads to the inevitable conclusion that the gold standard must have a lot going for it, as both Greenspan and Bernanke vigorously argued as adolescent economists. It was Keynes who realised that the gold standard limited the ability of governments to fool their constituents and therefore apposed the standard. In stead “faith” entered the equation, that is faith in the neutrality of the CB. With that who needs a standard?

Just a few days ago, in case you missed it, Greenspan weighed in on these matters and, without batting an eye pronounced  that QE was a failure. And, that the Fed could not extricate itself from this mess without causing a lot of pain. And “I never said the Fed. was independent”. And he also said that   gold is a good place to put money these days given its value as a currency outside of the policies conducted by governments.

The end of CB omnipotence perhaps or simple a case of an emperor without any clothes , or at least a change of clothes ?????