At the time TLM was about $11, it is now closer to $6. $5.63 would be a potentially reasonable target but there are no assurances as the longer term chart does not speak very loudly. The more detailed look is actually rather promising. 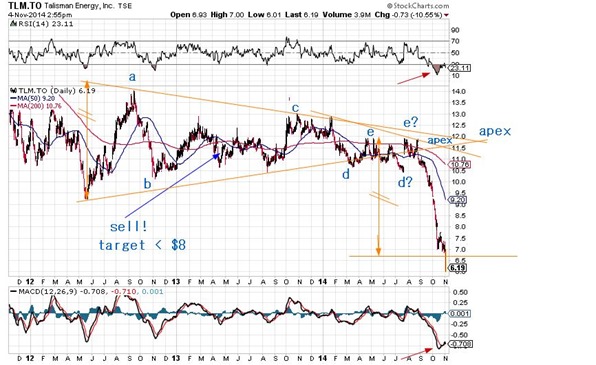 On this chart the triangle is much clearer (potentially there are two). At the $6 level both the RSI and MACD are screaming “buy”. Proportionately it has dropped a same amount in the first part down from $24 to $10 as it now his from the top of the triangle at $14 to $6. In each case roughly 60%. The drop now exceeds the triangle measure AND it is occurring perpendicularly under one of the apexes. This stock should be a buy here or above $5.63