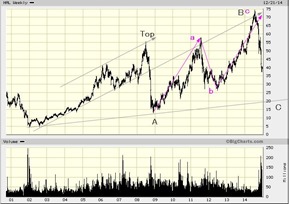 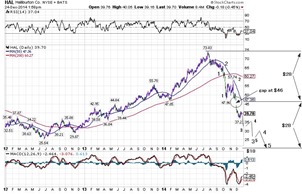 These guys are in Oil Equipment and Services, and were rather involved in the Iraq situation under the charming leadership of D. Cheney who no doubt parleyed his government job into a considerable financial windfall.

The Bigchart has an exceptionally well formed B-wave which alone suggest a drop below the 2009 low of about $12. In this case the line connecting the lows may stop the decline at around $19. Since we are in a C-wave, which must subdivide into  5 separate waves down how do we get there?    Using the gap-in-the-middle concept on this stock we have no problem getting to $18. Assuming that this gap occurred in the 3d of 3, where it most often does, the wave count could ultimately look as shown, this even without extensions or other things that could take the stock lower. A sell obviously.