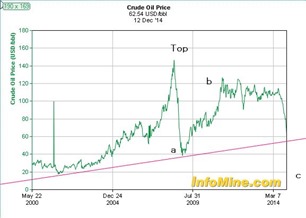 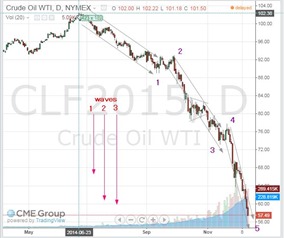 On the left we have the big picture, this is spot WTI the most common variety this side of the pond. It clearly shows that for some reason oil was “suspended” for a number of years, roughly between $120 and $100. An EW analysis would have called for a much earlier decline in a wave c of a large a-b-c, normally to new lows. However some resistance would be expected at the red line that connects the bottoms ( this chart is to Dec.12 and shows a price of $62.54, in reality spot was around $57. ) We are presently close or on to that line.

The chart on the left is the Jan. contract

. Do not know how that rose got there but it looks good so I will leave it. This future trades on NYMEX which is part of the CME, Chicago Mercantile Exchange, but trades in New York. It is on the internet if you want to see this stuff almost live, www.cmegroup.com . The nearest or front contract always converges to the spot price as it matures, in this case downwards as the market is in contango.  This means that if you are long the futures you systematically lose holding the position (think nat. gas etf s).

It is hard to get a clean count applied to this chart. Just looking at the tangent or slope of the curve there are two clear breaking points where the angle going down accelerates towards the vertical. Those points could be waves 2 and 4 in a 5 wave sequence. If so the drop should stop about here or perhaps just a few dollars lower, say at $55. (near the red line on the other chart). Oil would then bounce, possible for quite some time before doing a number of 4 and 5’s to correspond with the 1 and 2’s at the top. Ultimately the c wave should go below the low of a ($40 on the left chart but in reality more like $30). The bounce in the next few months could take the price back up $10 to $15 easily. In commodities the 5th wave is often extended, this is the 5th of 3 so that is a different story. In any event this 5th wave is already the longest.

PS Before you decide to trade this stuff please do not forget that each contract is good for 1000 barrels, so if you do 10 for openers you have a notional position of $570,000. Also, because the volume shown above is different from that shown on stocks, do not read anything into it. Futures always expand like an accordion  and then collapse when they get close to delivery.

Elaborating on the possibility of one more dip I have found a chart of the continuous front month ( it rolls into the nearest month automatically). 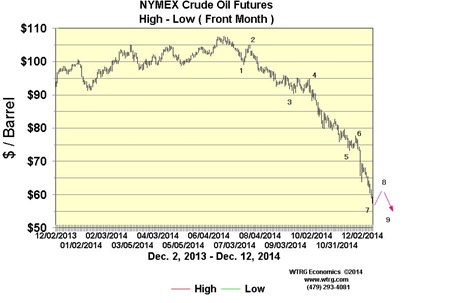 Granted that counting this stuff is mostly in the eye of the beholder and therefore very subjective, it still looks to me that we have a total of 7 waves now. To complete a 5-wave sequence you need 5+ Xx4 = 9,13, 17 etc. We are missing one.