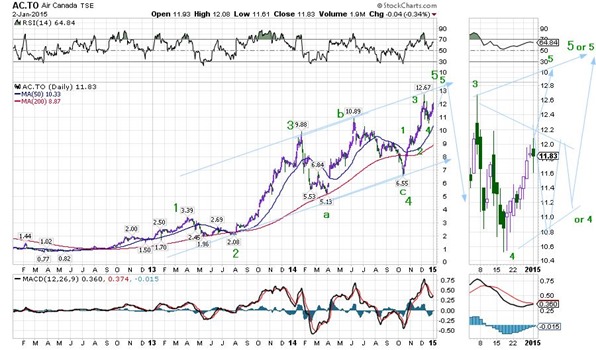 We had a good call in the past on this stock, all though not wholeheartedly. It is by its very nature a terrible business given all the variables of nationalism, monopolies, regulation and high capital costs. Fuel costs are also a large component in the overall operating costs and now that crude has dropped significantly it is assumed that these companies will start making a lot of money.  Pan Am went bankrupt when oil was at around $24 and dropping and using that example it would appear that capacity utilization, or the lack of it, was a more serious critical factor.

In any event we , potentially, have a clean 5-wave move up from just under a single dollar to the present almost $13. The 5th wave of this sequence is probably not yet complete. It would appear that we are in a minor 5th of 5.  Either way, $13 to $13,20/40 is where the upper trend line runs, depending on when it is reached. Once it has reached these heights it should drop back to $5.13 at the very least. We would not wait much longer to sell. The RSI and MACD confirm that a turn is just around the corner.

There is an alternative and that is that wave 4 ended at the $5.13 level and that from there a large wedge started. This scenario would allow for a rise to about $14, not worth the wait. 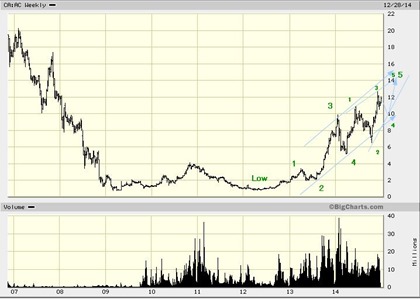