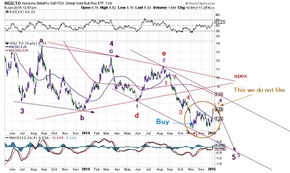 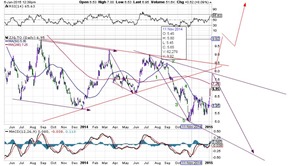 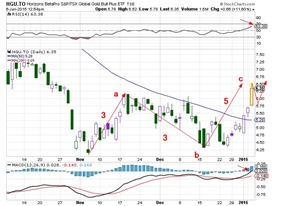 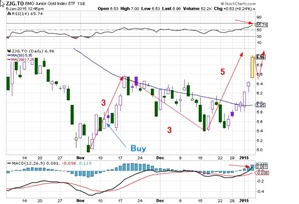 From Nov. 11, 2014, you are up about 25/30% so there is room to manoeuver. At the time we preferred the triangle idea which would have needed a single thrust down consisting of 5 sub-waves. We got that in both the HGU and the ZJG and then started to turn up quite smartly. Now that both those upturns have very distinct signatures that might suggest that they are corrections, 3 –3 – 5 or a-b-c’s we are not so sure anymore. It is entirely possible that there never was a triangle. Instead it might have been a running flat which would imply that the thrust is not a thrust but a wave 3 instead, 3 of 5 to be exact.. We then still need a 5th wave down, either in a conventional 5th wave without overlap, as shown in the HGU chart, or in a diagonal or wedge, also shown in the ZJG chart.

Gold stocks have performed well recently but very few show perfectly formed initial 5 waves up and therefore some caution is still called for. Below is the chart for ABX; 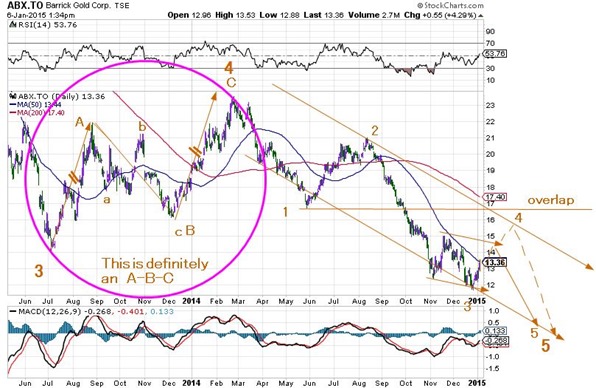 Here we have a similar but different situation. There obviously never was a triangle but there was a perfectly clear eight month long A-B-C correction (which, by the way, we caught in real time),  that presumable would have been a wave 4. After such a correction you need 5 sub-waves down which arguable we had in the form of a wedge. The rather feeble  rise from those lows suggest that this 5-wave sequence is not complete. If so we are now in c of 4 and could drop down again. This scenario would be negated by overlap at around $16.50 It could still become a wedge of sorts so the low need not be much below $10.50 or so. You risk a dollar by staying in.