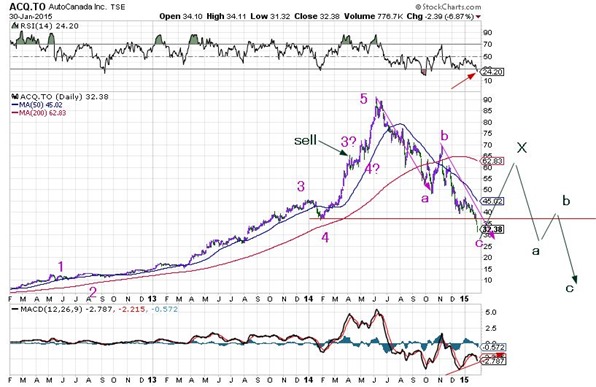 A little less than a year ago this stock looked like a sell. It had a nice 5 wave sequence, the RSI was already overbought and the stock had gone vertical. Not very good advice as the stock managed another $30 from there. However, on the positive side we are now almost $30 below that point. This is a momentum stock which operates exclusively on the assumption that there will always be a greater fool to take the stock off your hands in the future. This works fabulously un till it does not, here that point is at about $90 where you sold.

These people sell cars and trucks in the province of Alberta in the Calgary area. Low gas prices are good for car and especially truck sales, but not in this province. It has now become a barometer of the wellbeing of the economy there.

The drop . so far, appears to be an a-b-c (rather than 5 waves). That could of course be all there is, the entire correction, but we suspect it is only half of it. In that scenario oil should stabilize or even go up $10 or so per barrel and things will look up a little (relatively speaking). Then the process could start all over again as the second a-b-c forms to complete the “double zig-zag”.