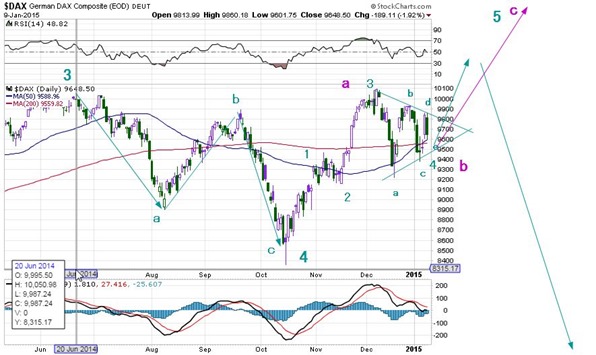 The DAX sports a similar triangle as discussed elsewhere ad nauseum. These triangles are invariable either in a 4th wave, or a b-wave position. (Alternatively they are misinterpreted as triangles but are, in reality, a series of 1-2’s). The different position depend on whether or not this wave up is part of a normal 5-wave sequence that subdivides in individual 5-wave minor waves or, whether we are in a wedge-like structure within which all the sub waves are 3-wave structures. Either way,if this is correct, we should get a thrust, or c wave up to at least 10500 and then the whole thing should more or less collapse. Do not trade on this. Neither the RSI or the MACD provide any meaningful clues.