Here are two charts from InfoMine, same scale, same timeframe , more or less, and so on. On the left Copper and on the right Gold. 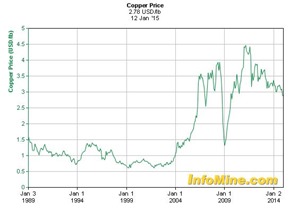 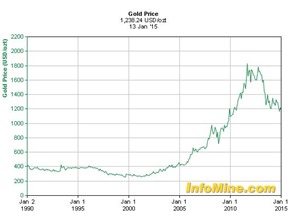 With the exception of the spike down in 2008 for copper the two charts are very similar. Both have their lows in or around 2001+ and both peak in 2011+. Moreover both manage an amplitude of about 9-times. The most recent, multi-year correction takes back roughly 3 out of 8 lines which equates to about 38%, normally a Fibonacci minimum. We can only speculate why the exception of 2008 occurred, perhaps copper as a base metal is more sensitive to economic growth which seemed to disappear during the initial phases of the great recession. Or perhaps gold was more sensitive to the expansionary monetary experiments of the Worlds central banks. Whatever the cause it is clear that the difference was short lived and that for the most part the two metals behave like twins, have an extremely high correlation (at least for this time period!), and are essentially interchangeable as if alchemy actually works. Those that delight in conspiracy theories  might want to delve deeper into what the Chinese have been up to. 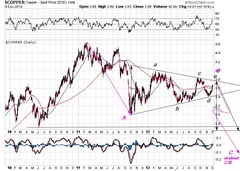 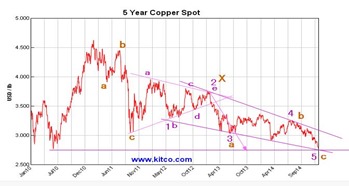 That was a bulls eye even if it took a year and a half longer. Nevertheless we do not think the count at the time was correct. For the triangle to be a 4th wave it is too big. A 5th wave may have started earlier and taken the form of a wedge. This would then complete wave A or 1 down at toady’s low. Perhaps a better characterization would be a double zig-zag with the triangle in the middle as the X-wave. We are not entirely sure as other variations are possible but the main thing is that we got to $2.70 per pound, the initial target. At the very least we would expect a pause of some duration at this stage, more or less. So if that is the case with copper, why not with gold?