It sure seems to be, and now the biggest company on earth at 748 Bln. cap. 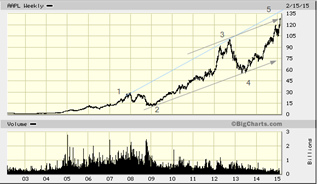 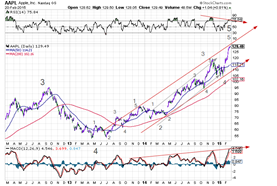 Arguable only a fool would go against the grain and suggest that this stock is a sell. But then, on the other hand, this stock did drop by more than 50% over the past seven years, twice in fact. If it did that again it would be down to about $60. Suppose the stock ignores its channel and manages another $20 or so to the upside, it would still drop back to $75 under these circumstances. Only if the stock manages to climb to $240 would you be indifferent to holding or selling if another 50% drop lies in the near future. Seen this way, only a fool would continue holding it. And that is precisely what momentum stocks get their energy from, the ingrained notion that there will always be a greater fool to take the stock off your hands at a higher price.

In EW terms we can count a clean 5 wave sequence from the bottom (but not necessarily from the start of the company in 1976). So it is reasonable to expect a pull back somewhere around here that would correct this entire move, that is down 50 to 62% or to wave 4 of previous degree. Even wave 5 itself subdivides nicely into 5 waves. The RSI is not supporting the recent, almost perpendicular moves up and, the MACD is hitting its head against the ceiling. For those that ever wonder about “fractals” the two charts provide an excellent example, essentially the are self-similar patterns that occur at different degrees. You will notice that the 5th wave looks pretty well identical to the whole thing.

Fundamentally, and we pay very little attention to this, success is invariable the basis for a downfall. It has a blinding effect on management at all levels and tends to close the mind. In this case none of that is readily apparent but there are rumours of starting a car manufacturing line of business, perhaps even an instant one as in buying Tesla. Apart from that, AAPL now represents something like 10% of Nasdaq , nowhere near the 30% that Nortel represented on the TSE or the 60+% of Nokia on the Finnish index, but still a pretty respectable amount. With Nasdaq less than 200 points away from the 5132 intraday high of 15 years ago (see below and previous blogs) things are getting a little stretched. We would definitely step aside. 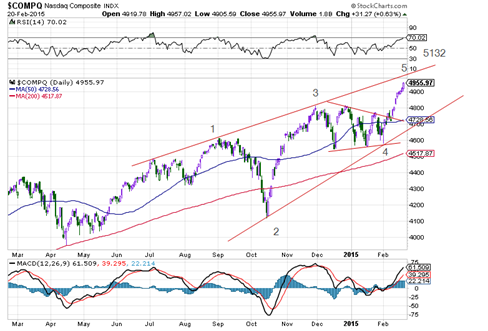