Brussels is the capital of Flanders, a lovely city and a good place to eat mussels. It is also the capital of the European Union and as all capitals, they wouldn’t be chosen otherwise, nice but rather dull.  At least they do speak Dutch.

If you look at a map of the EU and compare it to a map of the Roman Empire you will notice that they are very similar except that the North African rim  and the Levant was, and  much of Germany was not, part of the Roman Empire. Anyway Brussels is now the new Rome and, as is usual in capitals, it is a hotbed of political intrigue. They are the cognoscenti of what goes on day to day or, if you prefer, the insiders. This may explain why the Brussels’ stock exchange – not everybody knows one even exists! – was one of the best performers lately. They knew all along that they would pretend that Greece would stay! Here are the usual charts; 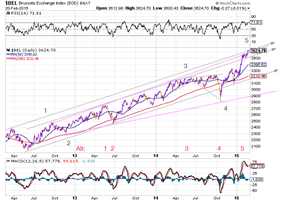 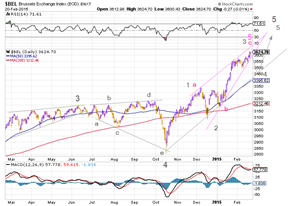 We struggle trying to find the right count, but an expanding diagonal triangle, shown in pink as the alternate, seems to fit best as each leg consists of just three waves. Alternatively, in black, it is a normal 5th wave with the normal 5 wave subdivision. In the former case we are there, in the latter we could go one little step higher. This is based on the expanding triangle , always a 4th wave in the middle of the chart on the right. This, by the way, is a pattern that is sometimes referred to, incorrectly as it has no place in EW, as the Jaws of Death, and in this case amazingly  just keeps on going

Practically speaking we always knew that the Belgian dentists, the deus ex machina of the investing world, were a financial force to be reckoned with but the best?? Up 29.02% in just over 4 months?? This is Brussels, not Zimbabwe. Our guess is that this is as good as it gets.