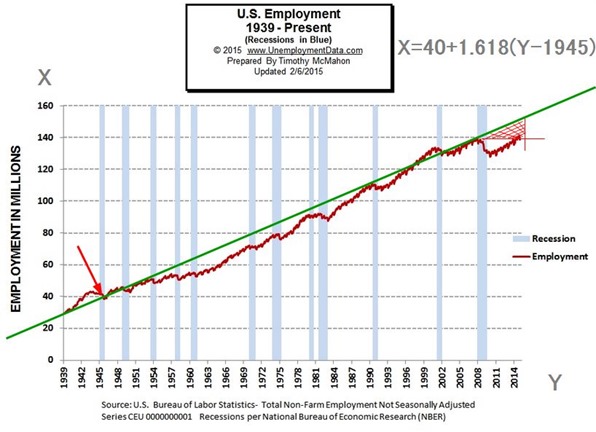 This chart is from www.UnemploymentData.com . I have made a few annotations or additions, the principal one being the green line from the lower left to the upper right. It is a straight line so the number of people working is a linear function of time and demographics. Using 1945 as the starting point, this function can be described as X=40+1.618(Y-1945) – the Fibo. number is pure coincidence!-.

The participation rate is not a variable in the above function. For the most part it should be fairly constant in any event and certainly should not have abrupt changes simple because Lehman went bust. The roughly 12% rate is in line with other non-official estimate such as those of ShadowStats. The bad part of all this is that you cannot trust government, the good part is that QE could go on for a lot longer unless some black swan comes down the river.