This is the Nasdaq Composite index, known for its tech. stocks and .com’s. The constituting stocks change fairly rapidly as the darlings of yesterday, MSFT, CISCO, INTC etc. etc. are replaced or pushed aside by Google, Facebook, Amazon and so on. It is a continuous renaissance of sorts but the ups and downs should still be subject to the, entirely pragmatic, rules of EW.

Under EW rules bull moves should subdivide in 5 separate waves and bear moves in 3’s. So if we are in a true bull move we should expect 5 waves up from the 2009 lows. So far there are only 3 so it would take a 4 and 5 still to complete. Given alternation, proportionality and all that other good stuff, the ultimate high could still be 6 to 9 years down the road.       However if we assume that this is part of the big bear move, that is a B-wave within a large flat A-B-C, than we only need 3 waves which we already have. The question then is simple if it is complete. Maybe yes, maybe no but a double top would certainly pose a lot of resistance. I remember the previous top as March 5 of 2000 as I moved from WG to DS on that day. Maybe the market wants an even number of years between peaks (4 weeks away?).

Instead of EW we could try using Common Sense , a commodity that is seldom counselled in the financial world. To add a little perspective we have put a little red balloon and arrow to reflect the precise time when the Maestro, Greenspan, first uttered the earthshaking concept of IRRATIONAL EXUBERANCE. He said a few things at the forum where he was speaking that were and are of special interest, quote;  We as central bankers need not be concerned if a collapsing financial asset bubble does not threaten to impair the real economy, its production, jobs, and price stability.
But how do they know? Well they do not and that has become painfully clear since. But for the moment we are only concerned at what level in the chart things became irrational or exuberant or both. It would seem that if things were that giddy already then, that things must be as bad or worse now. And now we have Yellen who is determined never to see a bubble anywhere.

We will go for the B-wave. C to follow any time between now and early March. By the way, the bull case, is not a very good risk/reward proposition in any event! Nasdaq as compared to the S&P and DOW is shown below to add just a little more exuberant perspective. 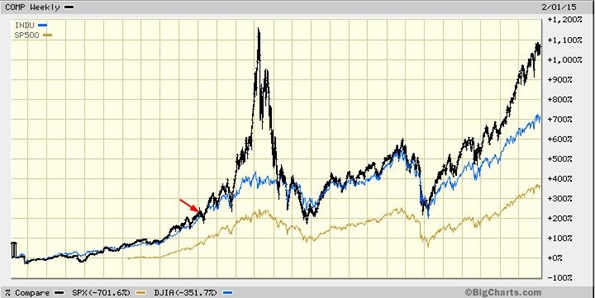