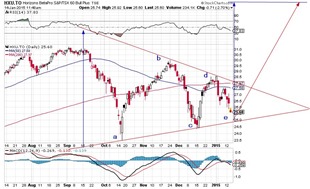 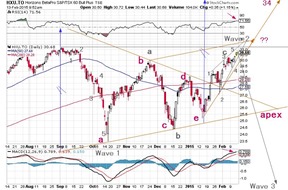 We strained to believe it but the triangle was unmistakeable (as it was in so many other places) that it could not be ignored. In case you did heed the advice you could have owned this at about $26. We would sell today for a small profit of about 16% for the month. The very simple reason is that despite the very clear possibility of this ETF going to $34, we recognize that there is a possibility that there never was a triangle. The first leg down, the a leg, always looked more like a 5-wave affair than 3 waves. That is a no no in a triangle. From that low point in October we could have been doing a simple a-b-c (in black) counter trend bounce. This will be negated at around $31.30 , so less than a dollar away, but in the mean time this is a big risk for an investment that goes against the grain in any event.

A look at the counterpart, the HXD makes the above all the more plausible; 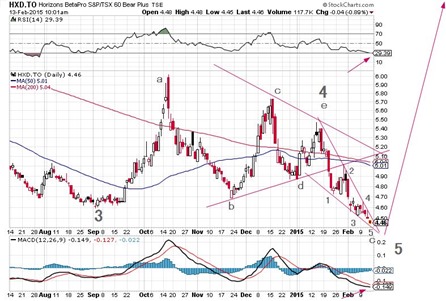 Essentially this is, of course, the inverse of the HXU. Here we have a similar triangle which is probable a valid interpretation as this ETF actually already has made a new low. The last leg down, moreover, very much resembles a wedge. RSI and MACD are turning so this might be a very good thing to buy now. The extra charming attribute is that the HXD is relatively immune to a further rise in the TSX if that unexpectedly were to occur.