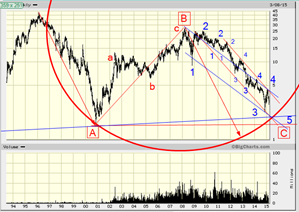 See also previous blogs on this stock. Earlier we had suggested that a new low should be expected on this stock. However, on second thought that is not necessary, at least not if you use a semi-log scale chart, the one on the right. What we are looking at is a very simple a-b-c down correction from the peak of Mnt. Everest back in 1995/6 at almost $40. For some inexplicable reason the markets love symmetry and consequently you will often find that in any a-b-c the c is equal to the a, either absolutely or as a vector and sometimes all three legs are equal as vectors. In this case that event would occur where the blue line from inception connecting the lows and the red circle with a radius of a, intersect. Should the stock drop to that exact point you have paradise in EW-land. In detail it looks like this; 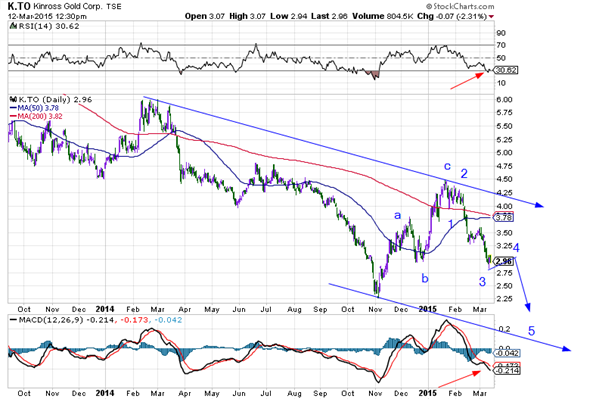 You work with what you have and here the bounce from the November lows is an unmistakable and perfectly formed a-b-c correction, implying a new low. The bottom of big wave A down in 2000 was at about $1.86 so if a new low is required despite the above comments $1.85 would do the trick.

From a fundamental point of view these guys have made every mistake in the book, one of colossal proportions (7+ billion and counting) so perhaps good times are ahead. They even pay a dividend of 5.4 %, higher than any of our banks. In our opinion this is what is meant with buying low and selling high. All though you do not know where those points are you at least do know that the low is no more than $2 off.  An initial target of $6 is a minimum expectation so that would be a 3x gain. After that $11 is very realistic.