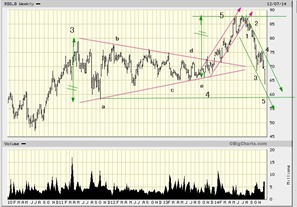 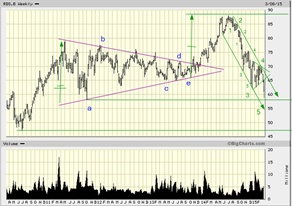 Roughly 3 months ago we anticipated a drop to about $59 and even anticipated the possibility of a triangle forming which would cause some big movements with little net result. We did get that but it remains unclear if there was a triangle. We are at the $59 level now and if the triangle was there it would most likely be a 4th wave triangle as opposed to a B-wave. This is easily accomplished by adjusting the count  to start with two 1-2’s. This then completes wave A down with a B and C to follow. This is tradable as the B could easily go as high as $75 and in the meantime you are earning a 6.1% dividend in the , now hard, US$ currency (on the ADR’s).

In the alternative it was a B-wave triangle and the second part of this correction has already started. That could take the stock down to $45 or even lower in a jiffy. For the moment we do not expect that. Using HAL, Halliburton (and SLB, not shown) it would seem that a time to pause is just around the corner; 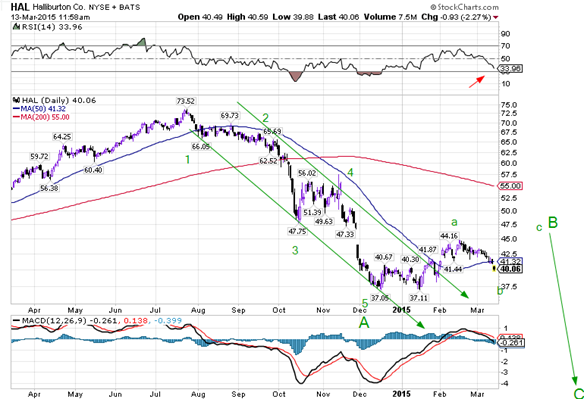 Note, first of all, that HAL already dropped 36.47%, a lot more than Royal Dutch. Next it did not have the big swings recently and has essentially gone sideways supporting the notion that it was one single 5-wave leg down. The RSI will soon be oversold (it is already with Shell) which also suggest a period of pause for the next little while (defined just like with the Fed. as when I change my mind, but data based!).

Shell is one of the few true blue chips left. It is the go to stock for widows and orphans and has been that for a very long time. At 6% your money doubles in 12 years which is a lot better than what you get on a ten year note, with, arguable, a substantially lower risk.