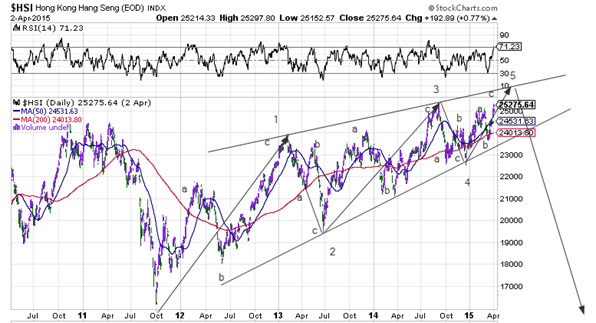 It was only a week or two ago that we last commented on this index. In the meantime it has gained roughly 900 points and is fast approaching our target which is around 500 points higher yet, about 25800 give or take and not including a possible throw-over. We are paying particular attention to this index as this wedge is a highly accurate predictor of what follows. Furthermore this would complete the entire B-wave so a drop to 16000 is only the beginning! Notice that the RSI is already touching on overbought territory. As it stands the timeframe to reach the peak is about a week. This could be delayed if we are still in the 4th wave which could become more complex and consume a little more time, but that is becoming less likely by the minute.