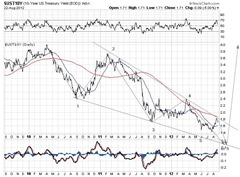 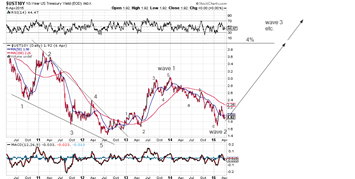 The US 10 year bond hit a  year low back in August of 2012. We anticipated that event basically on the symmetry from 1945 to 1979 to 2012. 33 years up followed by 33 years down, the exact dates are hard to find so this is a rough measurement but nevertheless quite accurate (see previous blogs). At the time a new low was still anticipated but that never materialized. The wedge, however , is clear as daylight and consequently the 4% was reasonable as that represents the base of that wedge. No new lows were made in the 10 year (the 30 year did make a new low). Most of 2013 was the year of the Fed’s “conundrum”, they had promised more QEs etc. and still rates went up, not down.

We are always taught to expect the unexpected but when it arrives we are surprised and annoyed that it was not the expected outcome. This is along the lines of Donald Rumsfeld’s known and unknown knowns and unknowns.  My guess is that interest rates will rise more rapidly than is now expected so Greenspan’s 2013 conundrum might well become Yellen’s 2015/16 enigma. From an EW perspective, there was never a conundrum , nor will there be an enigma. Both the conundrum and the enigma only exist if one assumes that the Fed. (or other CBs) actually can control interest rates. This may not, in fact, be the case at all. After all it is possible that we have spent the past 6 or so years in one of those famous “liquidity traps” from which it is almost impossible to extract the economy. Pushing on a string as we all know does not work but at the Fed. this is apparently still an unknown unknown.

There are undoubtedly many households, banks etc.etc. that have been egged on to do more business or borrow more than they otherwise would. The relative low cost has been a great stimulus for doing so. Should rates change unexpectedly and by more than is now expected, you can rest assured that the vast majority did not expect the unexpected.