See also previous blogs of RDS.B (not A!) 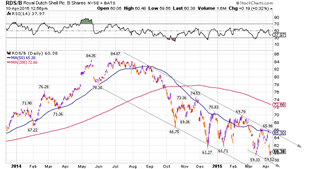 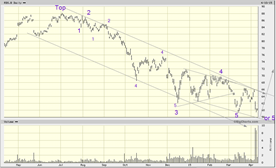 This may be a little chart overload, but I need that to explain the EW count. Royal Dutch, originally was a joint venture between a Dutch oil company and an English transportation company. The Dutch were in the majority with 60% and the English with the remaining 40%. In 2005 the company became legally one entity with HQ in the Netherlands, up to that point, that is for 98 years, the stock(s) had earned an average of 14% per annum, which clearly shows how well Dutch brains and English labour work together. This model was emulated by Unilever as well, however with a different mix favouring the Brits. In any event their are still two sets of shares, the A’s and the B’s. The difference is that the A’s, that trade in Amsterdam ,are subject to a 15% dividend withhold tax and the B’s are not as they trade in London.

The top chart is from Hargreavs Lansdown, an English broker. It is priced in Sterling, that is pennies. Note that the top is much earlier than on the Bigchart or Sharpchart, both of which are in US$$, and neither truly represent either the A’s or B’s as they are ADR’s. In EW it is all about the waves but it is never clear in what currency. In Euros(not shown) the low was set way back in December and the stock is now well above that; it looks like it has hardly moved the last year. In any event if we sort of average out the different possibilities we either already have a complete set of 5 waves down, or we could have one more drop to $58 at worst. Given the present proximity to that low and the potential of a bounce to $70/$74 and a dividend yield of >6%,( almost four times that of a 10-year gilt) – which is expected to stay even after the takeover – it should be bought now. This is the largest company on both the AEX and the FTSE and one of the last real blue chips. You can tell just by looking at the head office in The Hague. 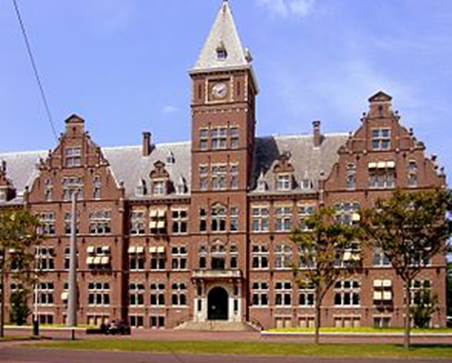 Did Shell pay too much? I have no idea but BG was trading at about 1/2 of its most recent highs whereas RDS.B, the shares that will be used in the take-over, is more in the 3/4 range. Since this is a roughly 70% stock and 30% cash deal it could be argued that Shell is paying with an inflated currency. It is a little bit like buying the same credit bond with the same maturity but a higher yield, essentially you cannot go wrong.