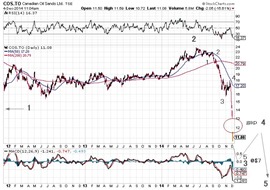 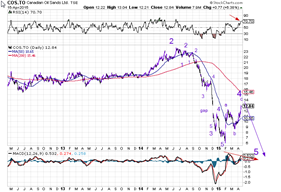 The target was $7 for Feb., it got to $6 on Feb. 2nd. It was recommended as a buy despite the fact that this stock was earmarked for a “stranded cost” example long before the notion of that being possible ever arose. Supposing you did buy there then the target was about $13 where the gap would close. $14 is where the c is equal to the a in the a-b-c bounce. It is now at $ 12.84 having reached a high of $13.04. Time to sell. If you care to gamble wait for $14 and double your money, by that time the RSI should be firmly in overbought territory.

If our longer term take on this stock is correct, and why would it not be as you just about doubled your money, this is wave 4 to be followed by wave 5 to new lows. In 2008 this stock was the darling of the industry at $55. Smells a little stranded.