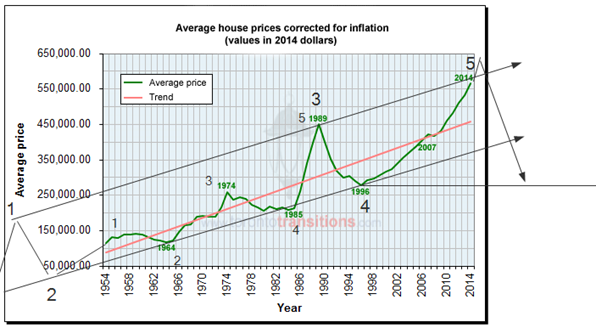 Longer term charts are hard to come by. This one is from torontotransitions.com but based on data provided by the TREB. I had to improvise at both ends to get what I wanted and that is a full 5-wave sequence. I am guessing that there was a significant low during or immediately following the Great Depression, say 1930. I have absolutely no idea at what level waves 1 and 2 were, they could be much lower than I have drawn which would simple make the entire channel so much steeper. In Toronto free standing homes are now over 1 mln. on average but in the GTA (Greater Toronto Area) the average price for a single dwelling was, I believe , about $633M., essentially at the top of the chart.  We could go a little higher to accommodate a steeper channel, but lets simple assume that an even $650M is high enough.

This blog does not predict or in anyway attempts to anticipate the future. All it does is apply,  in a rather moronic way, EW principals which are themselves entirely empirical. So if 5-waves up are complete you should expect a three wave correction to the level of the 4th wave of previous degree, that is on the way up,  AND/OR to a level that takes away about 62% of the entire up move. Both are at about $275M. From $650M to $275M is $375M, or, measured from the peak, 58%. Todays article in the Economists suggests that house prices are 35% overvalued based on affordability and rental metrics, fundamentals in other words. Judging by the duration of previous downtrends, about 10 years on average this should take a bit longer and very wild swings could occur before the bottom is reached.

But then , fortunately, EW is just some cult technical tool used by a few mad practitioners.

P.S. The chart is corrected for inflation using 2014 as a base. This makes prices in the past look higher than they were nominally!